I haven't blogged in a while because my day job has been crazy and I haven't had the brain power. I thought that my first blog post when I found my brain again would be about Au Contraire 2, the convention I attended the other week, but then I saw Pacific Rim. I have a lot of thoughts to dump regarding Pacific Rim, so I thought the Au Contraire post could wait a little longer. 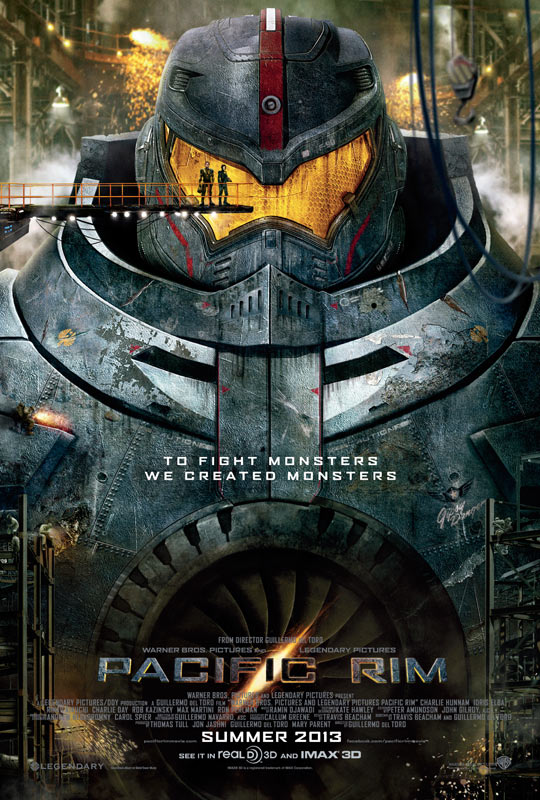 When I first heard about Pacific Rim, I wasn't particularly excited to see it. As a former anime fan I've seen my share of mecha stories, and for me the trope was somewhat tired and worn. But then I heard that Guillermo del Toro was the director. He's one of my favourite directors, so my interest was piqued. Then the trailers started coming out, and as I learned that these robots (Jaegers) have two neurally linked pilots, well, all of a sudden I really wanted to see the movie.

I should have realised earlier how much I would love Pacific Rim. I am the one who gets obsessed with movie soundtracks and sees the small gestures, the visual symbols. Therefore I am pretty much the ideal audience for anything directed by Guillermo del Toro, including giant robots and monsters, despite the fact that my demographic would suggest otherwise.

So, how was the movie?

First, the not so good things

There are a few poor reviews of Pacific Rim floating around, mostly complaining about the script and concept. Yes, the script is so-so, the science is flaky, and some of the characters are annoying (particularly the campy scientists). The names of the characters and Jaegers were also a bit cringing. Yes it is cheesy, but it is supposed to be cheesy. This movie is a love letter to a lot of other media products, some of them B-grade. I think the silly names were necessary; they were an important part of the feeling and spectacle of the movie.

del Toro made full use of all the elements available to him as a director to pack a lot of heart into sequences that were very sparse on quality dialogue. One sequence that particularly struck me was the prologue section in Anchorage.

Case study: My thoughts on the opening sequence and how I got teary

The Jaegers and the Jaeger pilots were introduced in a sequence that showed Raleigh and Yancey Beckett suiting up and preparing to fight a kaiju. This sequence was perfectly put together and made me, I kid you not, cry at the grandeur. The title music, heavy on the drums and electric guitar, played as these two young, swaggering men suited up and strode to the pilot area of their Jaeger. Electronic strains kicked in as the technology of the Jaeger was shown on screen. The colour palette of the sequence was golds, bronze, and red, reflecting youthful optimism and surety, and echoing the colour of their Jaeger Gypsy Danger's nuclear engine (her heart). As Gypsy Danger's head dropped into place and the orchestra came into the music, I teared up while grinning like a loon. In a single minute of perfectly sculpted movie magic, I was fully caught up in Gypsy and her pilots' story.

For some people the Jaegers or the Kaiju will be the best part of Pacific Rim, but I am always interested in characters first.

Best thing of all about Pacific Rim for me

For me, the best thing about this movie is the Drift, the neural connection between the dual Jaeger pilots. This single concept has taken an otherwise tired, used-to-death trope (mecha with human pilots) and made it sparkling new. There is so much potential in the psychological exploration of the link between pilots and the sharing of their memories. Many examples of this link are given in the movie: siblings, father and son, husband and wife, and in Raleigh and Mako the "OMG where have you been all my life" instant connection.

Is there romance in Pacific Rim? Not such an easy question

I personally think there could be a romance, or there could not. They certainly have an instant connection, which could be the beginning of love, but not necessarily. Either way, it is not our business. It is their business only. The characters keep it to themselves, which ties tightly into the motif throughout the movie of how Jaeger pilots don't need to discuss their issues because they already understand fully what each other are thinking. Mako and Raleigh don't kiss like they would have if someone else had made the movie (although the fight scene was sparky enough alone, as was the hug at the end). They don't have some sappy talk about their feelings. But why would they? They've Drifted. This theme is explained by two other characters (the father and son) who talk about how you don't need to talk in the Drift. They already know what each other thinks. Raleigh and Mako's first little sparks of possible romance are told in a few looks, but they are all that is needed. And that tells a story about the most important part of human interactions. It isn't sex. It is those looks. Those deep understandings. And that's an important message.

An important part of the Pacific Rim experience is choosing one's favourite Jaeger. Fan communities have sprung up online based around the Jaegers and their pilots, none so invested as the Cherno Alpha fans, who are a vocal lot indeed.

At first I liked Crimson Typhoon, because it is shiny and unique, but on reflection my favourite Jaeger is Gypsy Danger (even though I don't like the name. Er, racial slur, much?).

Why do I like Gypsy Danger? And here is where I get to talk about Guillermo del Toro's use of colour. I love, love, love the colour scheme of Gypsy Danger and how it reflects both the two main characters and the thematic thrust of the whole movie.

Gypsy's hull is blue-gray iron, strongly reflecting Mako Mori's colour palette, the palette that in turn reflects her memories of Onibaba's attack on Tokyo. Gypsy's nuclear heart glows orange-red like the lighting and colour palette of the prologue when we see Raleigh and Yancey, confident and cocky as they suit up to ride Gypsy.

The blue and glowing red heart together reflect several things at once:
Plus: chain sword FTW.

I think this may be my favourite movie ever. Seriously. Yes, it is a movie about robots punching monsters in the face. And whacking them with oil tankers. But it is perfectly crafted for the genre, does what it says on the tin, and is exactly the right size in regards to storyline and theme to satisfy an audience. I want to see it again.

(A spoilery note follows the jump)

Something toward the end of the movie struck me in its attention to detail. Throughout the movie, Raleigh, Mako and Pentecost often speak Japanese and their words are subtitled into English. But near the end, just before the payload is detonated, Mako yells something in Japanese which is not subbed. She yells "Sensei, ai shiteimasu" (Sensei, I love you).

After the movie finished I wondered why it wasn't subbed, and I think I've figured it out. The lack of subs fits with how Raleigh, Mako and Pentecost used Japanese to have private conversations in public. Mako is hiding an important part of the story in plain sight, in a way that isn't understandable by most of the audience. We knew she loved him, idolised him, but she probably never told him. At the end, she had to express those feelings, but still, she wanted to keep that moment private. I think that is a lovely detail.