I promised you an interview, and here it is. I recently interviewed Matt Cowens, one half of the writing duo behind Mansfield with Monsters. Read below to find out more about this fascinating book, and the talented writers responsible for it. 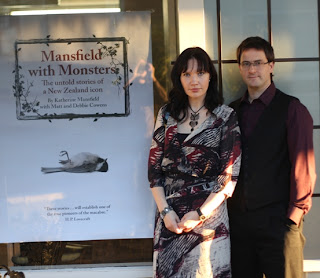 C: Thank you, Matt, for taking the time to answer a few questions about your book, Mansfield with Monsters.


First of all, could you give us the 'elevator pitch' for your book?

Mansfield with Monsters takes the short stories of New Zealand's most prominent, cherished author and reimagines them full of werewolves, vampires, zombies, sea monsters, mummies, giant bugs, alien invasions and Frankenstein monsters. It's a collaboration from beyond the grave.


How did you first become interested in the works of Katherine Mansfield?

Debbie and I are both high school English teachers - having travelled to Japan together to teach English shortly after we married, and worked in education ever since. We'd encountered Mansfield's fiction as high school students and at University, but I think it's fair to say that my interest in Mansfield was really ignited when I started teaching her stories at school. Fortunately the process of dissecting her work and translating it for high school students did nothing to diminish my appreciation of it. Quite the opposite, in fact.


What is your favourite Mansfield story?

I've been surprised by how diverse her stories are, and how dark. 'Miss Brill' is the first of Mansfield's stories I really appreciated, 'The Daughters of the Late Colonel' has really won me over on successive readings, but for a favourite I'd say 'The Fly'. It's a tragic, cruel story, but I love it. Especially with super heroes.


What is your favourite type of monster?

I loved horror films when I was in intermediate and high school. And horror fiction, too. I could list a number of monsters, from Romero zombies through to Lovecraft's nameless (or oddly named) horrors, but I think those who know me well would point out that a love of giant bugs permeates my writing. Stephen King's 'The Mist' is one of my all time favourite stories. The ending of Frank Darabont's screen adaptation makes it a little too depressing to rewatch, but it's an amazing film.


Did you learn anything surprising about Katherine Mansfield while researching the book?

Mansfield's biography reads a little like it's already been adapted for our project. She had a genuine interest in the occult, visited psychics, and was embroiled in various shenanigans. That she met Aleister Crowley was a surprise to me - especially as I learned of the actual meeting after having inserted a fictional one into her bio.


What three words would you use to describe the process of co-writing a book?


What is the major difference in process between writing a mash-up story and writing a standard from-scratch story?

The puzzle element was a definite change, as was the process of matching our style of language and expression. And, as an English teacher, there were a few times where I had to stop myself from correcting or modernizing idiosyncrasies in Mansfield's grammar.


What did you think of the publication process, and what was it like working with Stephen from Steam Press?

We knew that Mansfield with Monsters was a risky proposition - executed poorly it could alienate the literary community and the casual reader, leaving only a bitter taste in reviewers' mouths and a black mark on whatever institution chose to publish it. We were confident that we could adapt the stories lovingly, respectfully, and with skill. After hearing about the project Stephen asked to see the first 3 stories, and that whetted his appetite for more. Stephen is a hugely dedicated, professional and well-dressed editor. Our extensive correspondence about the project was both inspirational and crucial in fine-tuning the stories. Stephen brought a valuable fresh pair of eyes to the work, and crafted a beautiful book. It seems odd that we've only met in person three times - ours is a highly successful long-distance relationship (despite living only about 45 minutes' drive away from each other).


Do you and Debbie have any plans for further works of this type (that you can tell us about)?

We are both working on individual projects at the moment - Debbie has begun a mystery novel manuscript based around a blend of Greek myth and golden age Hollywood, whilst I am attempting the highly dubious sounding process of mashing up one of my own manuscripts, rewriting a Victorian ghost story novella I wrote some years ago to include even more fantastic elements.

Mansfield with Monsters was enormous fun to collaborate on - a kind of literary cryptic crossword for the soul - and we would gladly return to the mashup genre should an opportunity arise.


Where can people find you online?

Information about Mansfield with Monsters is available at www.steampress.co.nz. Debbie maintains a writing blog at http://debbiecowens.blogspot.co.nz/  while Matt occasionally updates http://mattcowens.livejournal.com/ 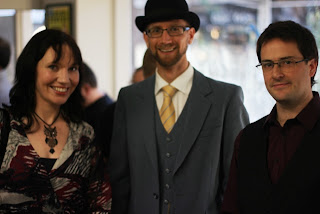 Mansfield with Monsters is available from steampress.com. The paperback is $NZ25 and the ebook (.mobi or .epub) is $NZ8. You can also download a free sample in .mobi, .epub or .pdf to try before you buy.

Although I probably wouldn't recommend this book to history purists, I do highly recommend it to anyone interested in weird or speculative fiction. I'm about half way through it at the moment, and I'm enjoying it immensely.