Of earthquakes, books, and hailstorms

Two years ago on this day the first earthquake in the Canterbury quake swarm happened. It was a 7.1M earthquake, described at the time as very close to the city, and very shallow. (Ha! Little did we know then that there would be more major earthquakes, all shallower and much closer than the 4 September shake.)

This evening, when I got home from work, I sat down to finish Towers of Midnight, the 13th book in the Wheel of Time series. Just as I was reading the epilogue, I noticed the sound of thunder in the distance. I went out and stood in the driveway, where I had stood 2 years ago listening to the post-earthquake sirens. I watched an imposing thunderhead approach. I could see the curved, sculpted front edge of its foot, the bulk of the cloud spilling out and above. The lightning lit up the whole sky. It was about sunset, but even so I could see the substantial darkness of the cloud. Lower small clouds scudded around it, attending like pilot fish, brilliant white against the bruised darkness behind. I sat on the ground and watched, wondering how long until the rains would arrive and I'd have to go inside.

I went in when I started to get chilly, even through the coat I had thrown on. I watched the lightning for a few more minutes. Then I noticed a faint sound, like rain. I thought that at any moment the rain would start to fall, but it didn't. The sound grew louder. I stuck my head back out the door. It sounded like a freight train hurling along tracks, but somehow only approaching at a snail's pace. Then it dawned on me that a hailstorm was on the way, and I was hearing hail falling some distance off.

It took another 5 minutes for the hail to reach my place. It hit like a cluster bomb. The media is reporting that the hail was about 15 mm in diameter, but it was bigger than that here, that's for sure. Here is a picture of some hailstones I collected from my driveway. 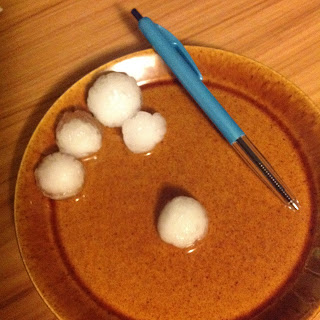 As you can see, they were more like 20–25 mm (officially a 'severe' hailstorm). The hail that fell on the lawn and therefore didn't shatter was all about the size of the largest hailstone in the picture.

I don't know why I am telling you all this, other than to say it seemed fitting and poignant to me that on the second anniversary of the 4 September earthquake, I finished an epic book (penultimate in a series) about momentous, end-of-the-world events, while an epic storm raged overhead, a storm befitting the book I was reading (although it would have been more fitting if I had been reading the previous book in the series, The Gathering Storm).

I guess I'll try not to finish the last book in the series, A Memory of Light, on 22 February.